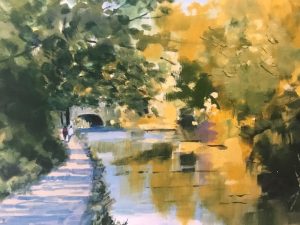 Barry Tinsley’s first major success with the Society came in the 2018 autumn exhibition, when his painting ‘On the LLangollen Canal’ was Highly Commended. 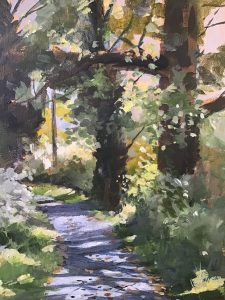 Barry was entered into a national schools art competition aged 10, later completing an art O level course. In the 6th form he was dissuaded from doing A level art and encouraged to study the Sciences, eventually moving into engineering and motorway construction. On retiring, though, he attended various courses and, after reading books by James Fletcher-Watson and Edward Wesson, became seriously interested in watercolour painting. 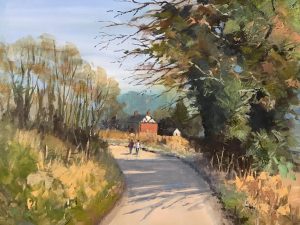 Barry joined the Grosvenor Art Society and enrolled in one of George Thompson’s classes. George was an inspirational tutor who encouraged him to try other mediums including pastels, which became his favoured medium.

Recently, Barry moved away from watercolours & pastels into oils & acylics, and immediately found them more satisfying . He enjoys painting landscapes in and around Cheshire and finds inspiration from visits to the Lake District and his home county of Derbyshire.